"Well it's not the life I expected at 19, I guess I'm lucky" (Christian (Paul Schneider) comments on his past and present predicaments). 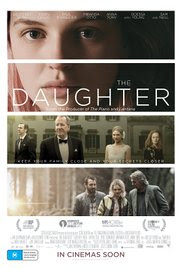 At last comes another classy, moody Australian drama in the realms of Lantana. Like Lantana, as with so many great narrative dramas, The Daughter has been adapted to screen from the stage. Henrik Ibsen wrote The Wild Duck in 1884 and Simon Stone adapted Ibsen's masterpiece to the stage. The adaptation ran to rave reviews in Sydney throughout 2015 and now The Daughter comes to our screen. And let me tell you, it is an outstanding contribution to world cinema; I'm chuffed that it happens also to be Australian.


The Daughter, like Lantana, tells the story of people intertwined via relationships and circumstance all living everyday existences albeit, in this case, that the lifeline of the community is about to be removed with the logging mill giving notice it is to close.


Henry (Geoffrey Rush) is the mill owner. He is on the eve of marrying Anna (Anna Torv)a much younger woman. His son Christian (Paul Schneider)  returns from the US to play best man. Oliver (Ewen Leslie) is married to Charlotte (Miranda Otto) and their daughter Hedvig (Odessa Young) they along with Oliver's dad Walter (Sam Neill) live on the outskirts of town and have historical links with Henry, Christian and Henry's late wife. The impending marriage sparks an unearthing of secrets; secrets which test the character of all the players.


Enough said. I'm not aware of the content of Ibsen's play. I imagine it follows themes related to the human conditions of regretful behaviour leading to betrayal and finally the hope that the repercussions have minimal effects. Yes there is a duck in The Daughter but it's role is minor except for a scene late in the film which gives us an intimation of what is to come. The Daughter is a handsome brooding film, which has some legitimacy issues but what film doesn't? When they are that good, one often starts looking for holes.  10GUMS


Posted by A Sliver of Film [Chris Greenwood] at 03:16 No comments: Links to this post

"Banks have conditioned us to trust them. What have we got from that? 25% interest rates on credit cards. They have screwed us on student loans we can never get out from under". Mark Baum (Steve Carell) outlines the state of play with regard to the U.S. financial landscape). 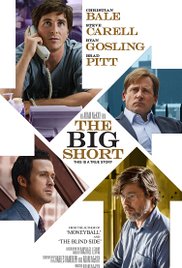 Everyone in the world was affected in some way or another by the  Global Financial Crisis stemming from the fraudulent banking methods which took place in the U.S. leading up to the "bubble bursting" in mid 2007. The Big Short sets out, in the simplest terms it can muster, to try to explain why and how this happened. I'm a little the wiser but I'm still mulling over the facts portrayed in varying terms on screen.

The poster for The Big Short and the preamble prior to the film's release gave me a false sense of how it may play out. I was looking to see 4 big stars (Bale, Carell, Gosling and Pitt)combining to  bring the banks of the day down because they could see a housing bubble occurring based on a banking system lending money to people who in some cases didn't even have an income. In some ways this is what I got but the intertwining method director Andrew McKay (Anchorman) used to filter the information through each of the characters made for a more exciting experience.

The fact is, The Big Short is based on real life characters who did  make big money from their knowledge. How do they make big money from a crisis of epidemic proportions? Well that is all in the title. Short selling is a method of making money in a falling market. For the method to be successful, the players need to have good research and possess great courage. The film does a great job of building tension via all of the players and their varying temperaments. Christian Bale's Michael Burry is brilliant as the autistic genius who takes his financial employer to the brink. Burry lights the fuse from which the rest of the script sizzles.

The Big Short is chock full of facts about a time we are still paying for. If some of those facts are still unknown to you then The Big Short may help you to better understand a system so corrupt and ultimately unjust it will make your blood boil. Carell's Mark Baum keeps us morally grounded throughout. The Big Short is an important story well told; it has a couple of Oscar nominations but maybe that is where it will come up short. Bale may surprise however. 9GUMS.

Posted by A Sliver of Film [Chris Greenwood] at 03:08 No comments: Links to this post

"At these Games, some competitors have won gold, some have broken records, and some of you have even soared like an eagle." (An extract from the closing speech at the games by Organizing committee president Mr Frank King). 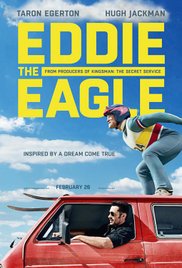 The Calgary Winter Olympic of 1988 was famous for what purists might believe were the wrong reasons. I say that because purists might like to remember the record breakers of those games. A speed skater won 3 golds, can't think of his or her name and the flying Finn broke a record on the 70M jump, I'm not sure of his name either. I can tell you however about the Jamaican bobsled team and Eddie the Eagle Edwards who both gained infamy, not for winning medals, but for battling against the odds just to compete.

Eddie the Eagle therefore gets the Disney treatment. It is light, cheery and we learn nothing about who Michael Edwards really was or is. It seems Edwards had options as to how he could have had his tale told. One of those options involved the sometimes acidic Steve Coogan in the title role. Edwards rejected the nastier version (his words) presented to him by Coogan. I'm thinking that if Coogan was involved then the comedy value to the film would certainly have had currency.

What we get instead is a very light treatment about a dorky kid who remained that way throughout as he followed his dream to represent his country at an Olympics. Edwards fulfills his dream because his ego is so much less inflated than his courage. In deciding that he would compete in the 70M and 90M ski jumps at a Winter Olympics  (while possessing none of the skills or background of the other competing international stars) he proves his intestinal fortitude. The ride we take with him is, at times, stomach churning and takes us as close as we get to Edwards.

The feats of Eddie were so inspirational at the 1988 Calgary Olympics that people worldwide paused to watch each of his jumps. He was mentioned along with the Jamaican bobsledders in the closing speech. Hugh Jackman, noted for the discerning role choices he makes, plays a fractured, fictional mentor who needs a cause. Hugh adds bite to a film which may just struggle to find an audience. I hope families flock to the screens because it makes a great discussion point for parents to talk with their kids about a time where professional sport was more about people as opposed to business. I'm ever the optimist. 7GUMS

Posted by A Sliver of Film [Chris Greenwood] at 03:04 No comments: Links to this post

"Hail Caesar is everything you could ever want in a Coen Brothers movie. It has crime and passion, it has mystery and intrigue, with an all star cast" (The corny trailer voice over capturing the era Hail Caesar is emulating). 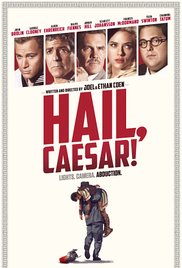 I get excited by every new release from my favourite film makers, the Coen Brothers. I know it may not be another Fargo or Inside Llewyn Davis but there is certain to be new and stimulating dialogue, unpredictable plot twists and characters only the Coens could dream up. Well in Hail Caesar they do not disappoint. This time there is a sense of predictability in their work but it is all part of their intent.


Picture this; it's 1951 and making movies is a no holds barred business of the cut throat kind. Eddie Mannix (Josh Brolin) is a producer (more of a Chief Executive Officer) for Capitol Studios in Hollywood (where else). Mannix is a cliche but with all the stresses of dealing with; the kidnapping of his studio star (George Clooney), arranging a marriage for a pregnant,single lead actress  and managing the attempted transition of his biggest Western star into a matinee idol in a dialogue driven costume drama, the thing he is most discomforted about is telling his wife lies about his smoking habits.


So while Mannix is the constant in the story, the film plays out as a series of elaborate skits and set pieces. In the same way that The Life of Brian is remembered for the stoning segment or the blessed are the cheesemakers scene,  Hail Caesar will be remembered for the editing suite scene (Frances McDormand) or the boardroom discussion about what God means to a group of religious leaders. Then there is the genre sequences which are just down right clever. Channing Tatum will surely become a Coen regular after his Gene Kelly impersonation.


What does it all mean? O Brother Where Art Thou is the closest predecessor to this light parody on a Hollywood lost . I'ts interesting that Clooney plays a similar clown like character to his Everett in Brother. Does the movie hold together? No, not really but I don't know that is meant to. Is it a rollicking, entertaining chunk of fun entertainment? Yes, you bet your cotton picking socks it is. 9GUMS.


Posted by A Sliver of Film [Chris Greenwood] at 06:17 No comments: Links to this post

A Sliver of Film [Chris Greenwood]